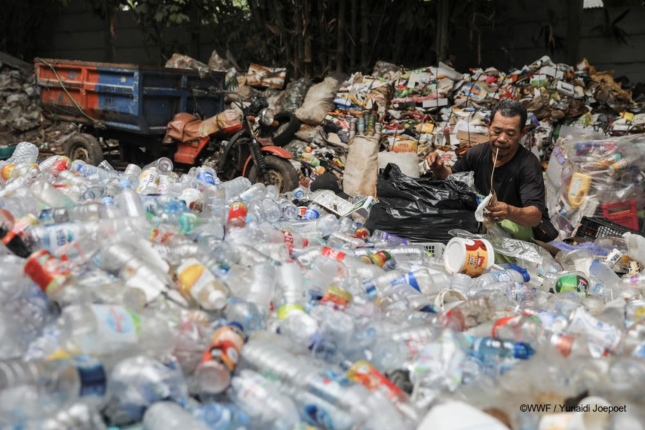 After China issued its plastic waste import ban in January 2018, global plastic waste shipments were quickly rerouted to Southeast Asia, with Malaysia as a top recipient. Like bamboo sprouts after the rain, illegal plastic recycling facilities quickly popped up in Malaysia. To stay under the radar, some operators set up recycling plants and waste dumpsites in oil palm plantations.

In 2019, Malaysian authorities shut down 170 illegal recycling factories in a series of high-profile raids. The government declared the country would not become the new dumping ground for western waste and customs officials started refusing waste imports. In total, some 225 containers filled with plastic waste were returned to 21 countries. However, Malaysian import companies with approved permits continue to bring in plastic waste. While these imports are a hot button issue, they make up a smaller portion of Malaysia’s total plastic waste—the bulk stems from domestic consumption of single-use plastics.

Landfills are overflowing in Malaysia. Encouragingly, some of the more progressive Malaysian companies and consumer brands have switched to recyclable and recycled materials and adopted the reuse model in recent years. Their moves support the government’s adoption of a mandatory extended producer responsibility (EPR) scheme to oblige producers and importers to assume full responsibility for the products they offer to the public—not just during consumption but also during the end-of-life phase.

The Problem Lies in Our Own Backyard

A 2015 study estimated that Malaysia produced 0.94 million tons of mismanaged plastic wastes in 2010, of which 0.14 to 0.37 million tons may have been leaked into the ocean through waterways. WWF-Malaysia’s Extended Producer Responsibility (EPR) Scheme Assessment for Packaging Waste report published in September 2020 estimated that the total annual post-consumer plastic waste generation in Malaysia in 2016 was at 1,070,064 tonnes, equal to the weight of almost 10,000 blue whales or three empire state buildings.

Malaysia’s landfills are overflowing with low value plastic packaging and sachets. The country’s expanding tapao (take-away food) culture has accelerated the domestic plastic packaging generation. A simple meal of take-away noodles can contain up to six different single-use plastics—plastic bags to hold the noodles and soup separately, another small plastic package for chili sauce, a plastic spoon, chopsticks packed in plastic, and a bigger plastic bag to hold all the separate items together.

The take-away packaging and other carry out boxes made of styrofoam or flexible plastic generally cannot be recycled because they are made of flimsy, low quality plastic and are contaminated by food residue. The waste path is linear—it flows in one direction from production to consumer to landfill, incineration, or litter. Closing the loop on waste requires better product and packaging designs, collection, sorting systems, and recycling infrastructure to transition towards a circular economy by increasing resource efficiency and reducing the use of virgin material.

Not dealing with plastic pollution is no longer an option as it has become a pressing issue that is affecting each and every one of us. Malaysians do not have room to accommodate the often-dominant “wait and see” mindset.

A Recycling System That Can’t Keep Up With Cheap Plastics

The Malaysian recycling industry is fairly developed, and produces 1.5 million tonnes of recycled resins a year that are worth approximately RM 4.5 billion (USD$1.125 billion) in revenue. High-value rigid mono materials such as PET and High Density Polyethylene (HDPE) have a strong existing recycling market in Malaysia as they are easier to collect, and have a higher weight and value per piece. Polypropylene has a wider range of accepted materials for recycling including clear and colored packaging of food, take-away food containers, and non-packaging items.

While the local recycling sector has the processing capacity for low-value materials like polystyrene and LDPE flexible packaging, the local feedstock comes predominantly from commercial and industrial sectors which produce clean waste that is usually available in large quantities. There is no systematic separation and recycling for low-value and hard to recycle post-consumer packaging that is often highly contaminated as it gets mixed together with general waste, especially food.

For decades, waste management has been the financial and administrative responsibility of the government, but the system has proven to be inefficient and unable to keep up with rising plastic and packaging waste generation. The Malaysian government has recognized the need to create an EPR scheme to demand greater responsibility from producers to improve packaging designs with less material and higher recyclability, and to support waste collection and separation.

While corporate innovations combined with taxes and subsidies can help steer the market away from problematic flimsy and hard-to-recycle plastics, transforming a linear waste economy to a circular economy for plastic needs to be supported with relevant regulations. The Ministry of Environment and Water announced the formation of the Malaysia Plastic Pact, a multi-stakeholder platform that encourages key players along the plastic value chain to commit to the national targets. As part of the pact the ministry created an EPR working group to champion EPR discussions and implementation.

Other government agencies in Malaysia serve a supporting role in the EPR implementation process. The Ministry of Housing and Local Government announced the formulation of the National Cleanliness Policy that identified EPR schemes as one of the key drivers for the adaptation of a circular economy in the industrial sector. Similarly, the Economic Planning Unit of Malaysia has proposed the adoption of an EPR scheme in the Twelve Malaysia Plan (12MP) 2021-2025, which marks the end of Vision 2020 and sets the way forward for national development agenda.

In Malaysia, some companies are already incorporating circularity into their products and packaging by switching to recyclable and recycled materials and creating packaging that can be reused. An alliance of several consumer brands set up a voluntary Producer Responsibility Organization (PRO) with the vision to fund and improve collection, boost the recycling industry, and help shape the future national EPR scheme.

Influential Roles of Policymakers—Making it Happen

With industry players anticipating the adoption of the EPR scheme, and various ministries carrying out discussions related to EPR, a clear and unambiguous legal framework is the key first step. This can only happen if policymakers take decisive steps to outline a mandatory national EPR scheme that prompts plastic producers to create a reliable financial flow for large-scale collection, sorting, and recycling of plastic. EPR legislation should also create a level playing field so all obliged companies, including multinational companies (MNCs) and small and medium enterprises (SMEs), are provided with fair and equal opportunity to contribute to the system and achieve circularity. Since all the companies that are bringing packaging onto the market are obliged to contribute to the EPR scheme as governed by the legislation, the rules apply equally to all obliged companies, hence issues such as free-riders enjoying the benefits of the EPR system without paying the corresponding fees, could be avoided.

Ultimately, a circular economy can only be achieved by making circularity in businesses large and small a norm. Such a vision will only be achieved with government-supported economy wide regulations across the board.

Jazlyn Lee is a SEA regional coordinator for the EPR project that is part of WWF’s No Plastic In Nature by 2030 Initiative. She drives engagement with businesses and governments in targeted countries in Southeast Asia to build a collective action and systemic approach to address plastic pollution. Jazlyn holds a Master’s Degree in Economics from University of Malaya.